Steve and I were both successful at taking our very first javelinas with archery equipment. It was an awesome hunt but pretty strenuous as the peccaries were located in some very steep and rocky terrain. This hunt took place at Mason Mountain WMA. It was a State hunt on State land. We had applied for the hunt through the Texas Public Hunt system and were fortunate enough to get drawn through the lottery. You may remember that we had been drawn for a deer hunt in 2014 at Mason Mountain. So when we received notice that we would get to return, albeit for a different species, we were elated. Mason Mountain has a special place in our hearts.

After orientation and drawing our compartments, we headed out. We had never specifically hunted javelina before and were unsure how to start. Watching all the videos in the world can only give you a starting point. It was time to figure things out for ourselves.

Javelina are not exactly “pigs” despite having that distinctive piggy nose and tusks. They are considered new world pigs and originate in the Americas. Whereas our common, and very tasty, swine are old world pigs. Contrary to popular belief, javelina are not related to rats or rodents at all. Javelina belong to the suborder Suina with pigs and hippopotamuses being their closest relatives.

We were fortunate to see a group of javelina almost from the start of our hunt. Unfortunately, we had just climbed to the top of a very large outcrop of rocks and they were on the other side and several other outcrops away. After climbing down, driving around to close to where we saw them, then climbing up that outcrop, they had disappeared. We didn’t see any other javelinas that day but did come across a very prickly situation. 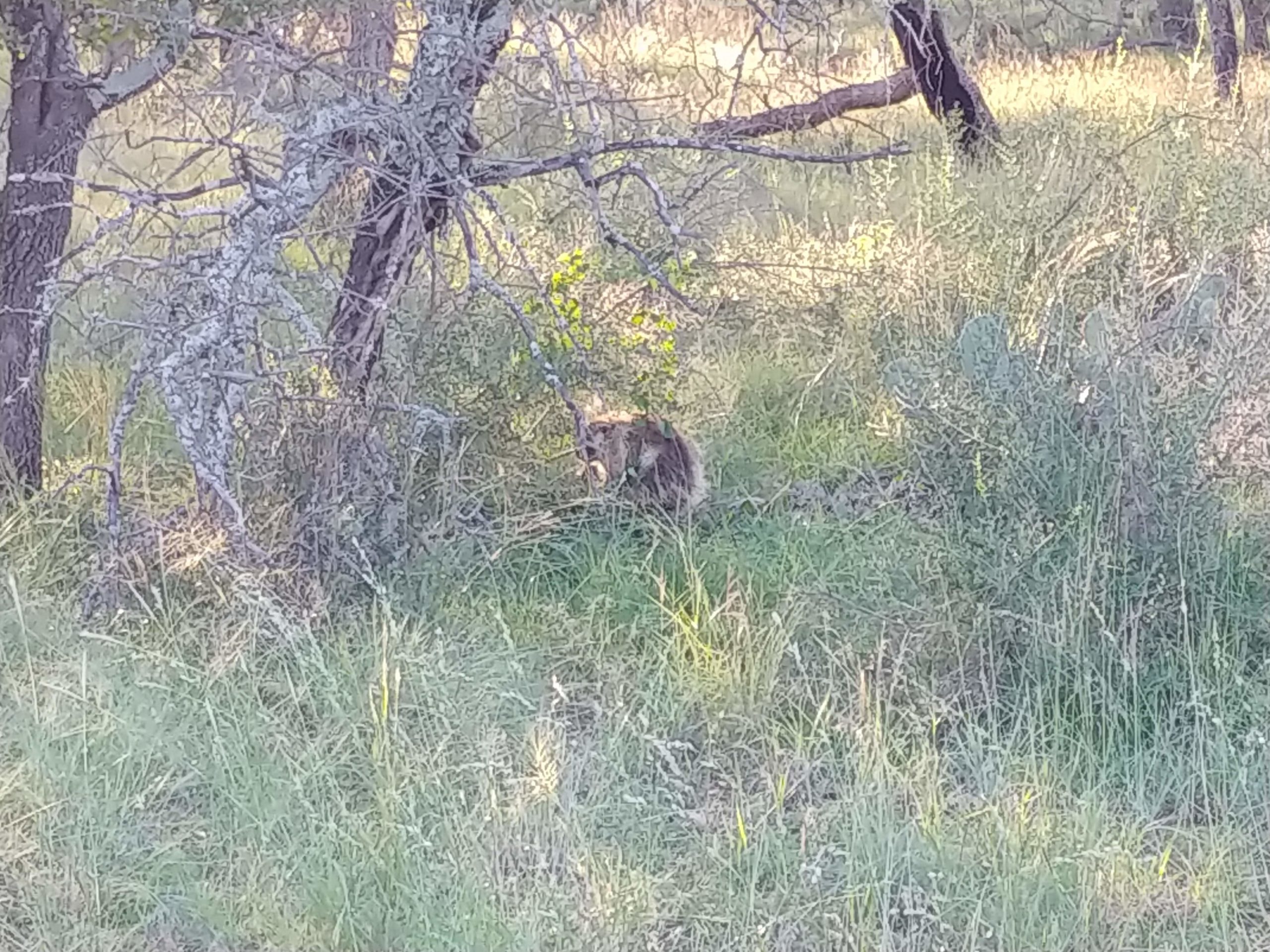 While scouting we came across this fellow with a paw tangled up in some vines. I thought at first he had been snared but it was just some tough vines that he somehow gotten wrapped tightly around a paw. It looked like he had been there for a while. He had the ground and bushes around him torn up. We called in some help and got him free. That was only the third porcupine I have ever come across in the wild. They are pretty cool little critters. 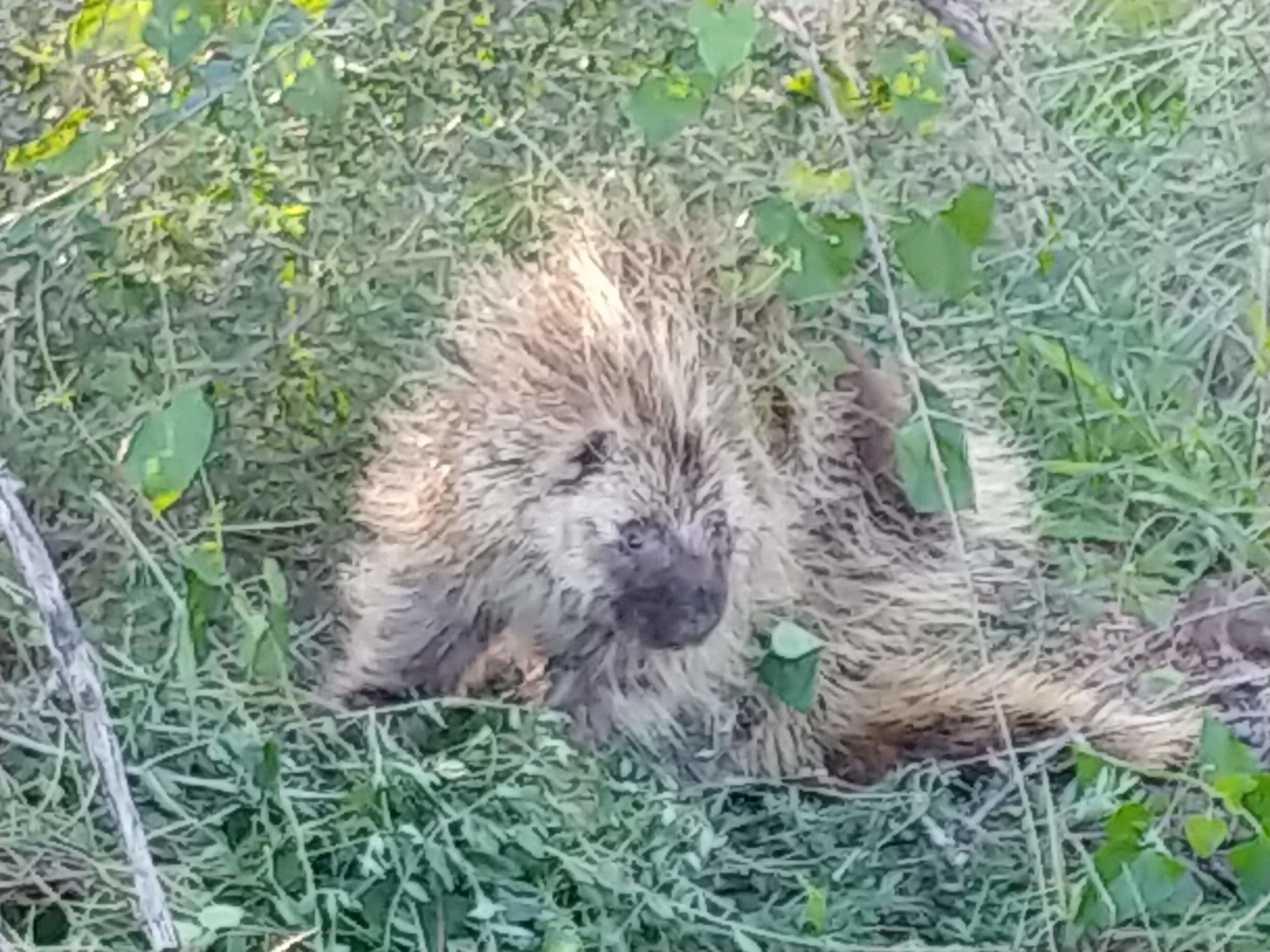 The next day we scouted several more areas. We even came across one of the numerous exotics that roam the property. 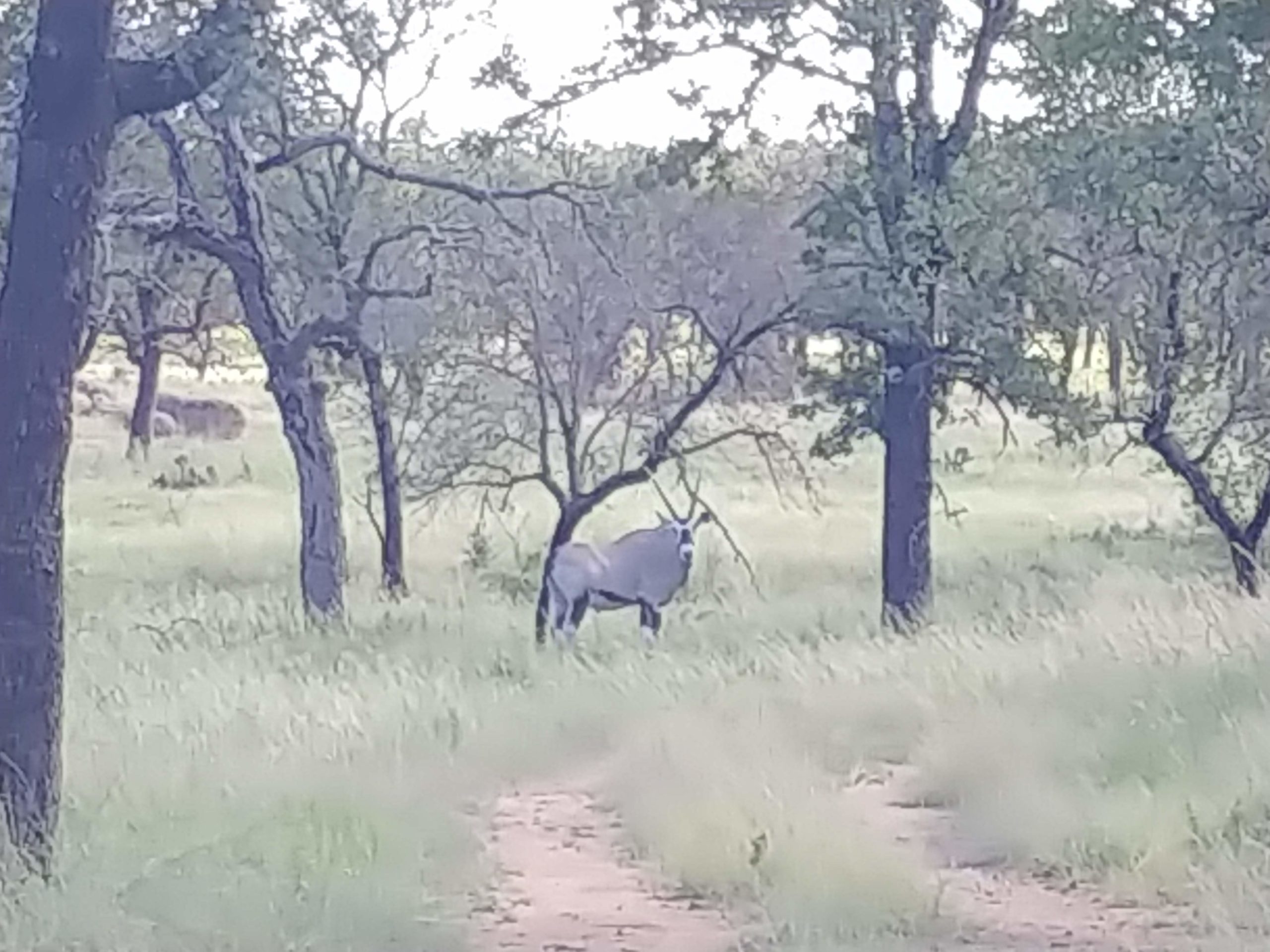 It wasn’t until we climbed up one of the larger rock outcrops that we finally saw javelina again. It turns out that the javelina here like to stay near the rocks. We had only been using the rocks to get a higher vantage point to scout. We should have been concentrating on the areas around the rocks themselves. 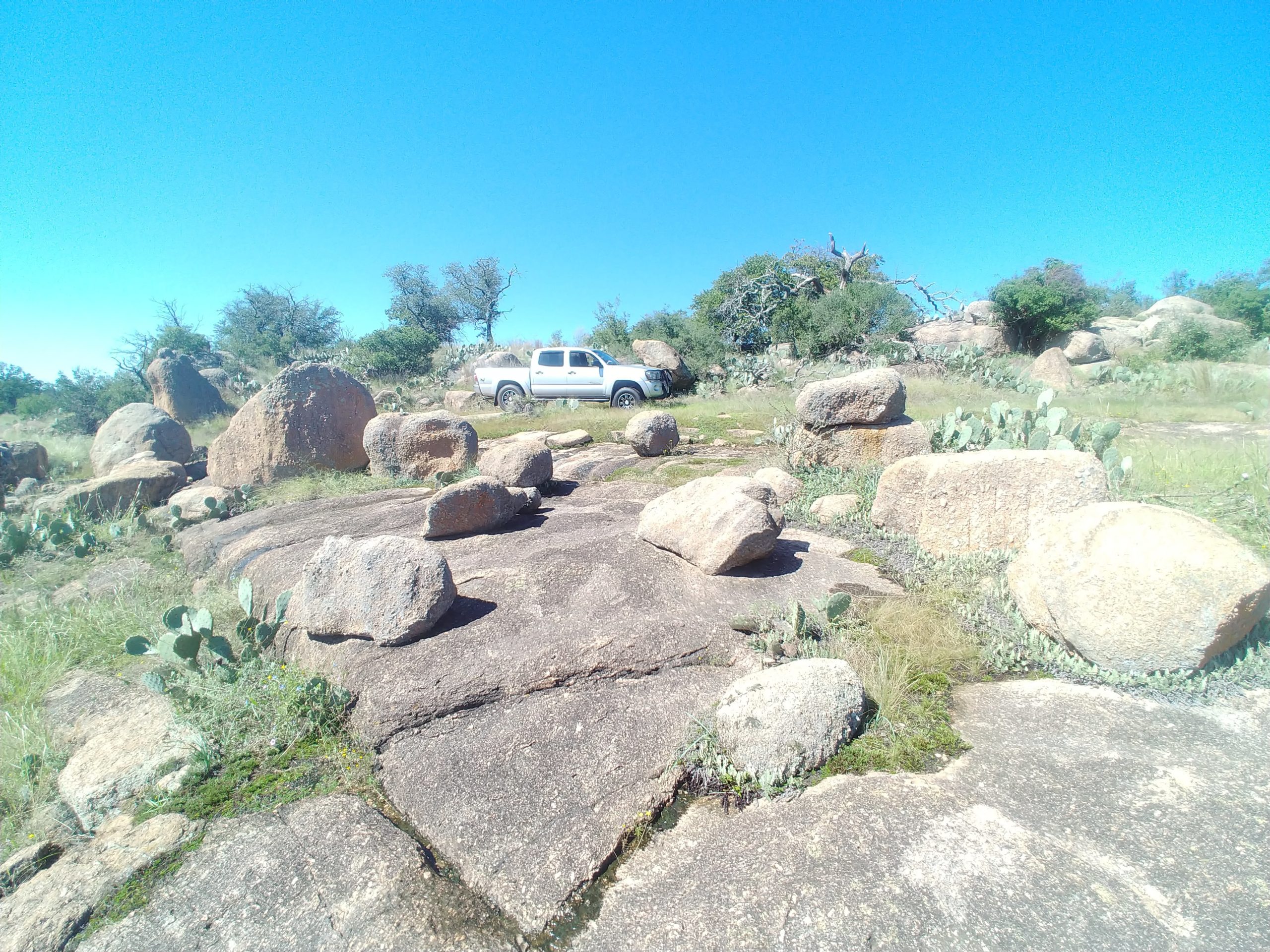 The javelina we saw were only about 100 yards away and they had no idea we were there. They were feeding around a large boulder giving us time to get the wind in our favor and slip in a bit closer.

Steve was the first to get a clear shot. When a large sow presented him with a broadside view he wasted no time sending an arrow. His shot looked good. It was a bit forward but through the shoulder. She let out a grunt and ran.

Over thirty ticked off javelina billiard balled off the rocks, through the brush and around the trees. The hell? We had only seen maybe a dozen. Now three times that number were zipping around grunting and popping their jaws looking for whatever or who ever had dared to disturb their peace. Thankfully they don’t see very well and we were protected, mostly, by the rocks. Still, it made keeping track of the one in that number that had been hit. Within moments the javelina had scattered to the four corners and were gone. One second there were a few javelina placidly walking about, then thermonuclear war, and then there were no javelina to be seen. We were left trying to figure out just where in all that mess Steve’s javelina went. I found some blood and we followed it for a while until it stopped. We circled the area but didn’t find any more signs of his target after searching for over an hour. 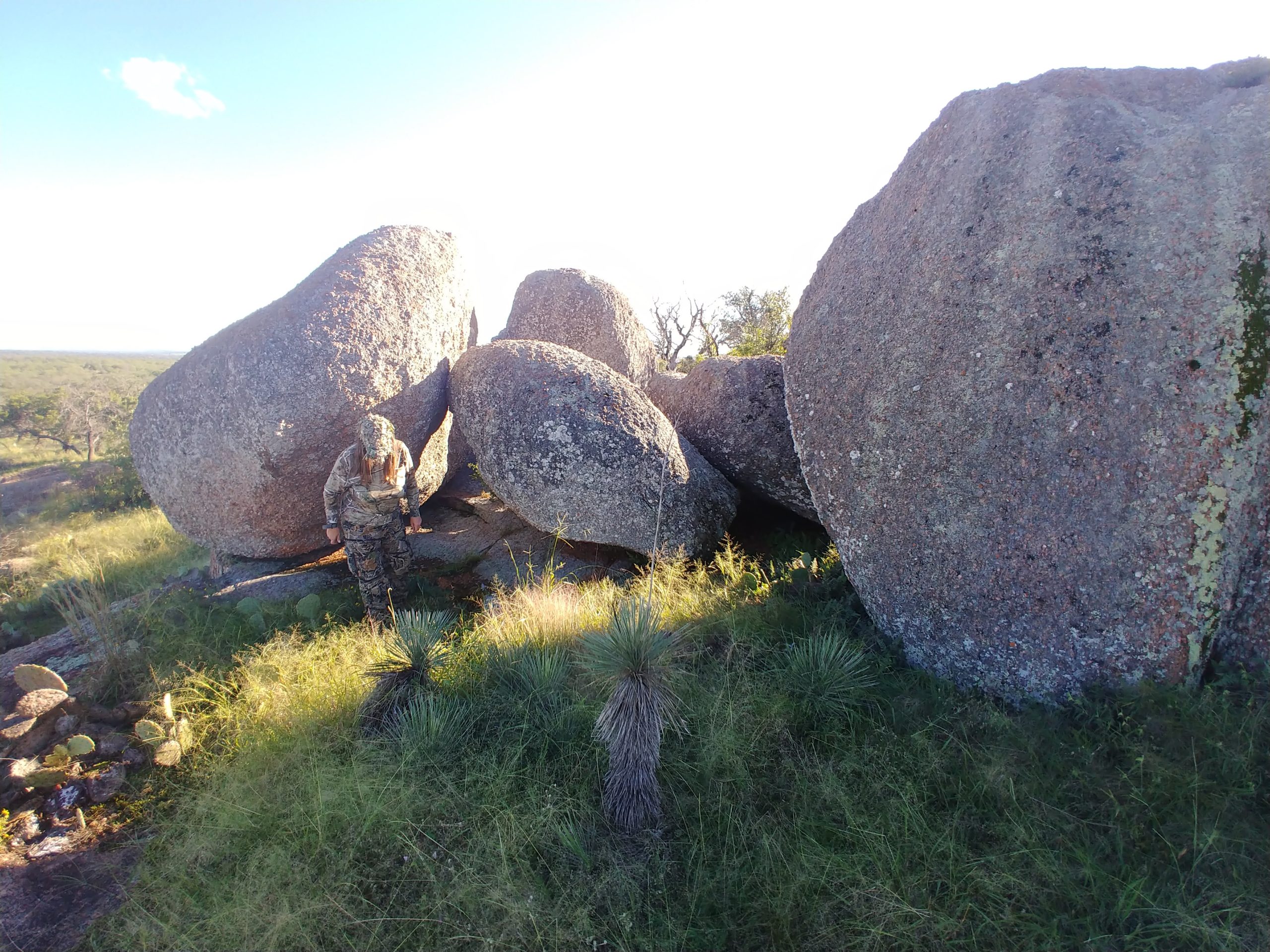 Despite not finding his javelina we didn’t give up. Well, I kinda gave up, but Steve kept looking. I headed out to see if I could find where the main group had gone and maybe get a shot at one myself. I saw a lone peccary feeding way up the mountain side but didn’t have a shot. After trying every which way I could to get closer to it I had to give up. They were just too well entrenched in those darned rocks and knew every crack and crevice. 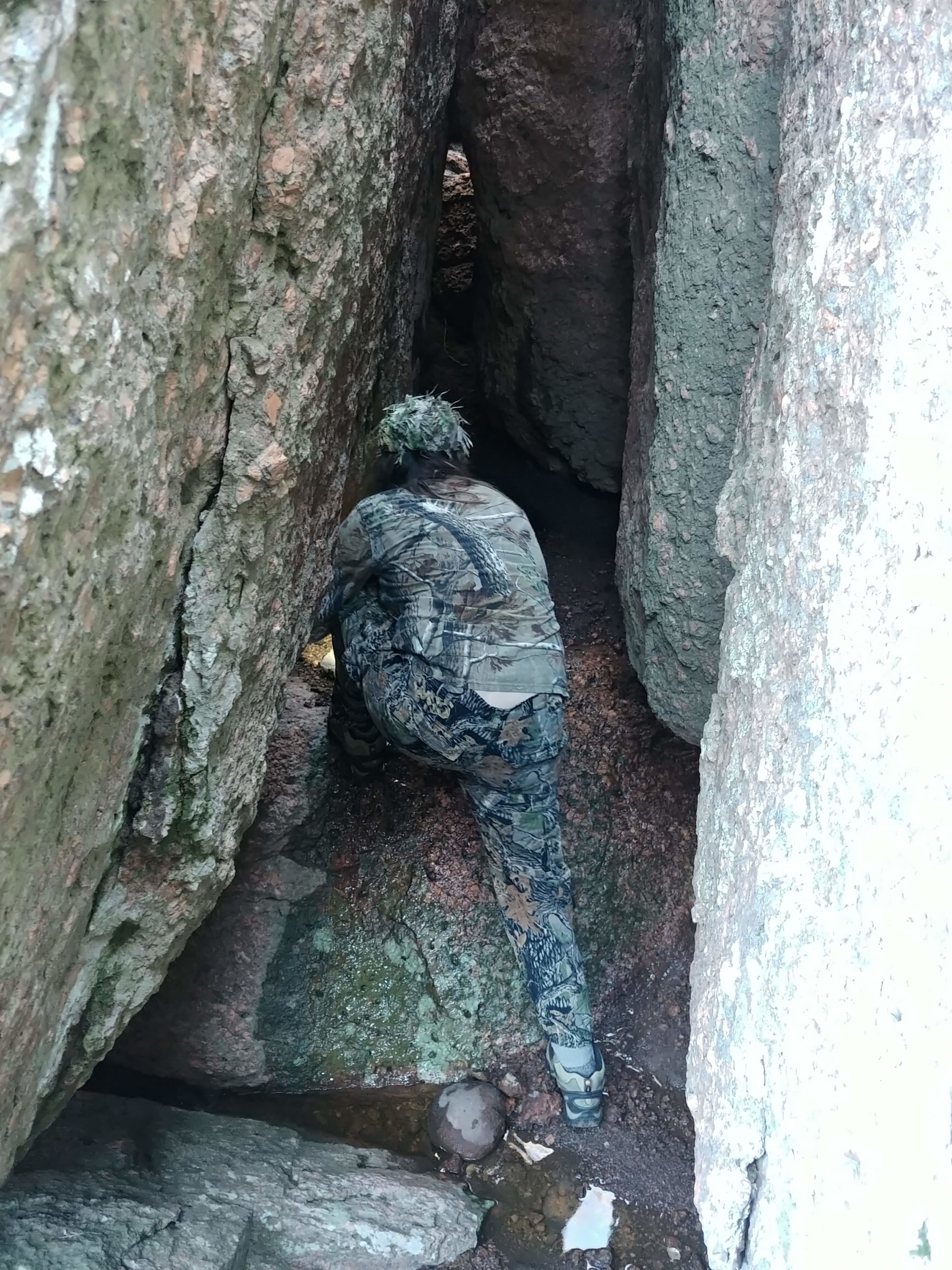 So I met back up with Steve to see how his search went. I had just gotten to him when he saw the blood. Sure enough, he had found where his javelina had gone. We worked our way around and finally came across her. She had only gone about 100 yards from where he shot her.

After Steve got his we were happy to call it a successful hunt. We checked her in with the hunt co-ordinators where they weighed and aged her. She turned out to be a very old gal indeed.

A note about javelinas. They have a scent gland in the middle of their back just above the rump. It looks a lot like a nipple and gives them a distinctive smell, much like a skunk. Because of this javelinas are often called “stink pigs” or “skunk pigs”. When cleaning a javelina it is a good idea to remove this gland immediately. Believe me, you DO NOT want to get any of that smell anywhere near the meat. Once the gland and skin is off the meat smells very much like deer meat.

We skinned her and quartered her up before icing her down. For a small critter she had a good amount of meat. It was a good day. 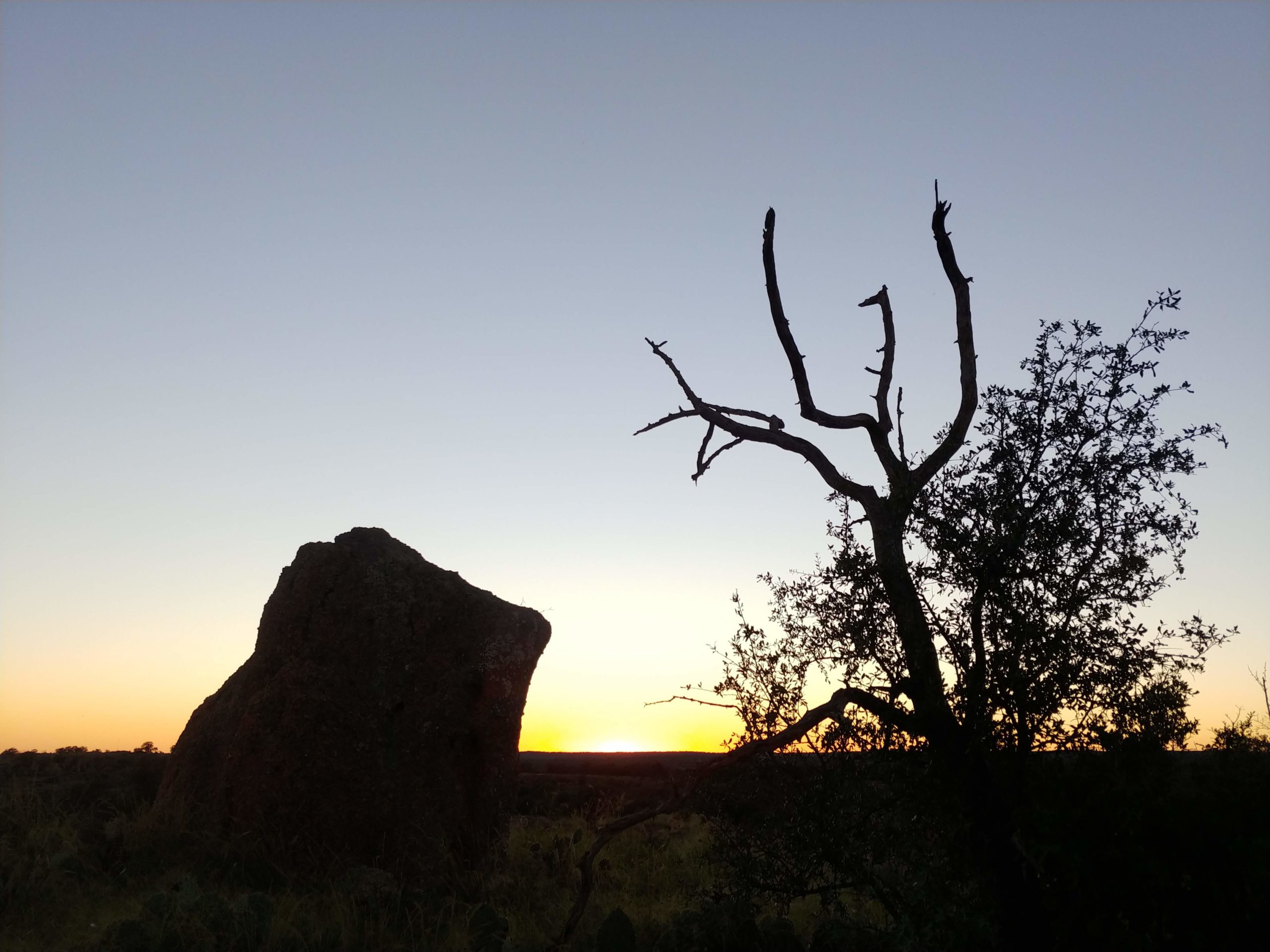 The next day was my turn. We knew about where the herd went so I headed out to see if I could find the main group. I looked all around the rocks but didn’t find them. It wasn’t until I got down wind that I smelled them. The sun was getting high and it was hot so maybe that helped bring their scent to me. Either way I finally knew where they were. Unfortunately, in order to get the wind in my favor, I had to climb up and over the largest outcrop on the property. As I topped the ridge I found them bedded down in a 10 foot crevice. They were piled in and on top of each other taking a mid-day nap. The crevice had some thick brush and trees growing in it. All I could really make out was javelina fur between the limbs and leaves. I couldn’t tell what patch of hide belonged to which animal. Finally one of them got up and walked a bit away from the group. I had a clear shot in just a few spots but that guy made the mistake of stepping into one of them. One shot and I dropped him. The rest of the herd boiled out of the crack except for two which stood around popping their tusks looking for the source of the trouble. I thankfully, was well out of reach.

Steve took this picture right after I made my shot. That is me on top of the rocks between those two dead looking trees.

It was no fun dragging him out of that stinky, chigger and flea infested crevice.

We headed back in to check in my kill then skin and quartered him up. He was on ice within an hour of my shot. 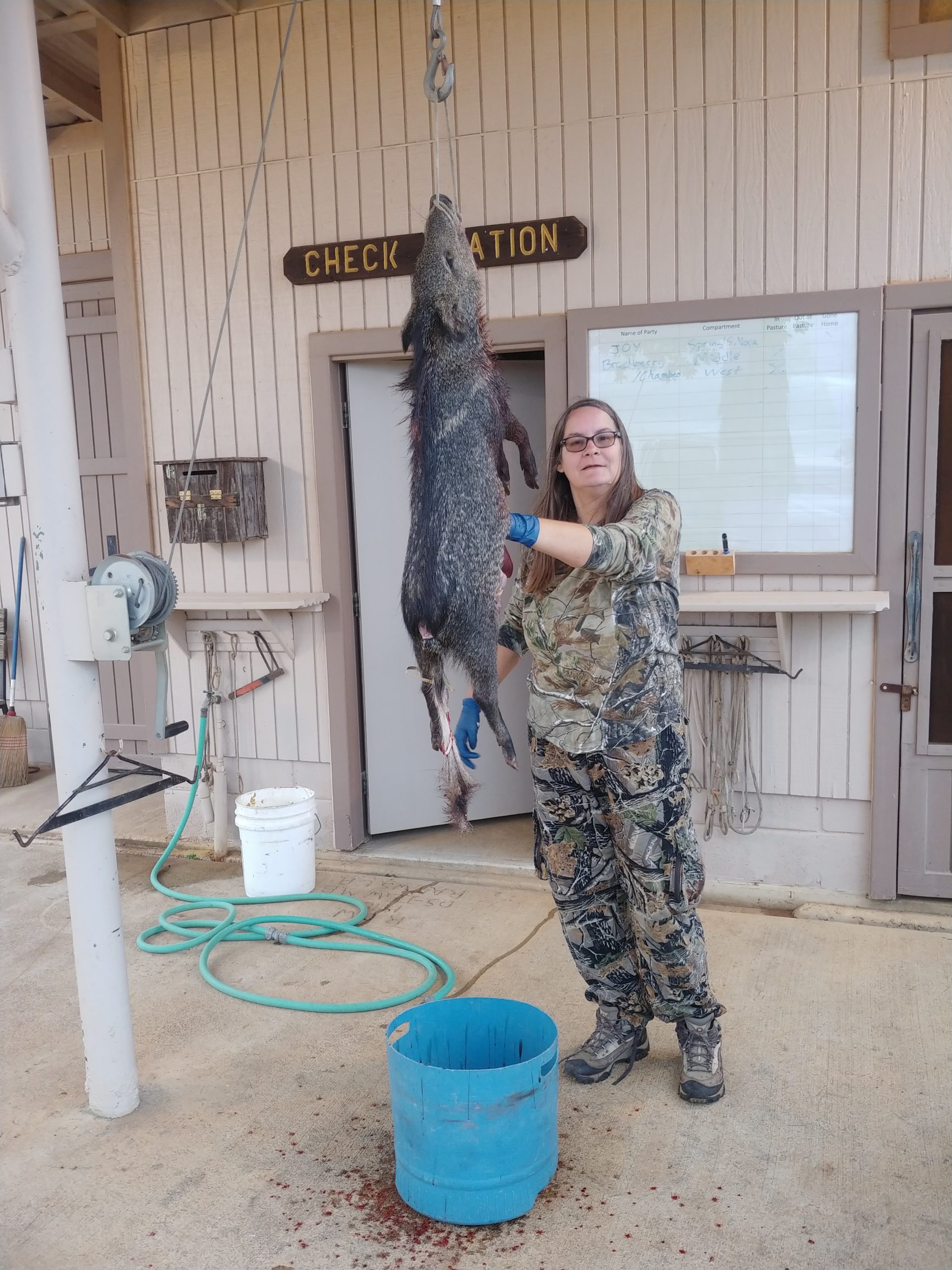 Mason Mountain once again provided us with an exciting adventure. The bonus was bringing home some meat which was turned into delicious smoked sausage links. Everyone who has tried it loved it. The trick is taking off that gland and skinning the javelina out quickly. Javelina gets a bad rap because of their smell but the meat is very good. 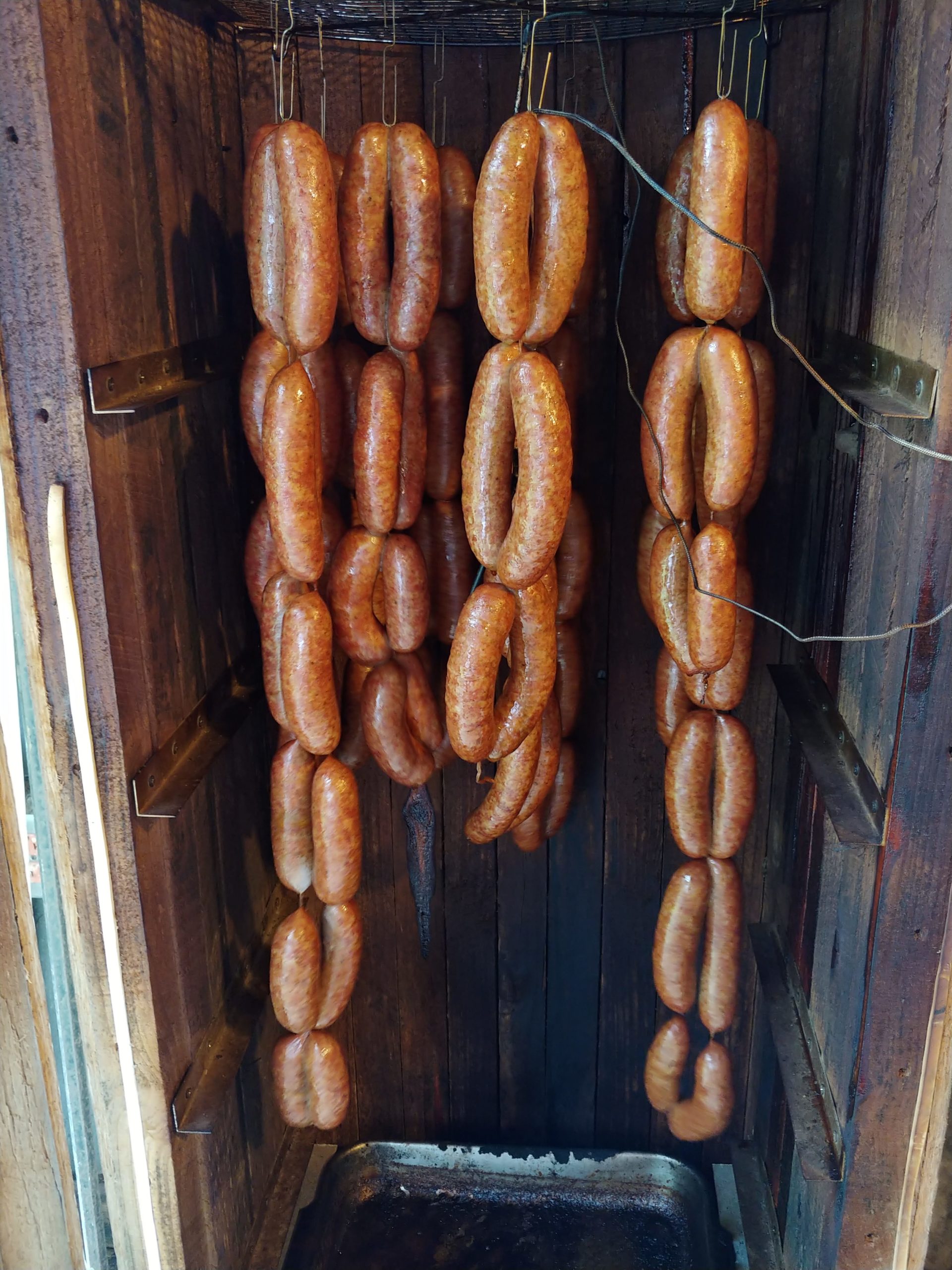