Until recently I never thought of myself as a painter. Sure, I could draw rather well but adding depth and color to my “doodles” just seemed beyond my abilities. And I was OK with that.

But then a friend of mine shared a local Facebook page with me. She thought the idea looked fun and thought I would enjoy it. That one simple act set me down an artistic path I didn’t think I would ever tread. The page was Brazoria County Rocks. It seemed that there was a national movement to paint ordinary rocks and then leave them in public places for complete strangers to find. It was a way of having fun, making art and possibly brightening someone else’s day. You could paint whatever you wanted. You didn’t need any particular skill, just some rocks and paint, or stickers or markers. Anything really. 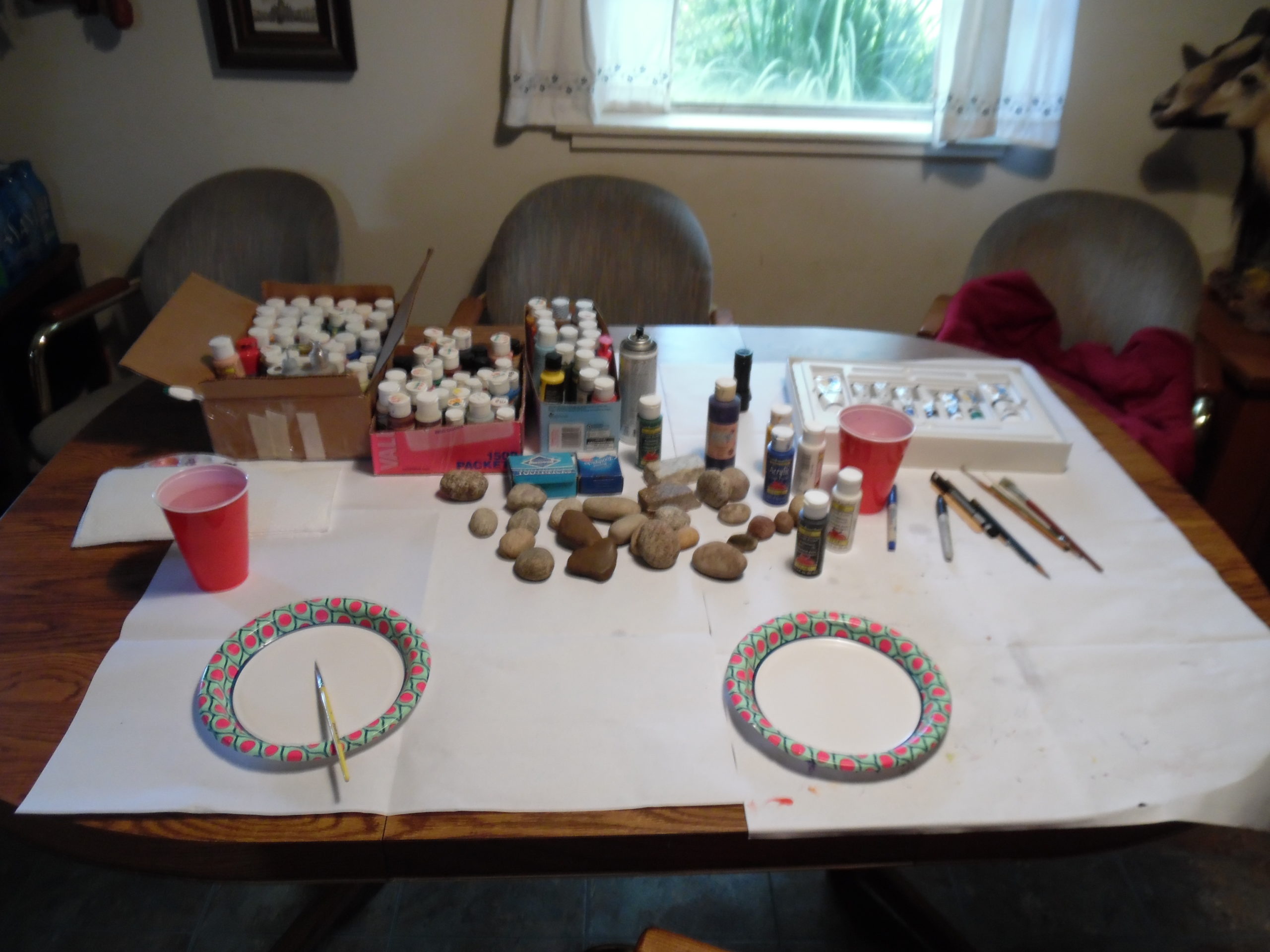 Brazoria County Rocks (still in existence) was a place to post pictures of your rocks before hiding them somewhere in Brazoria county. Then, if someone found them, they were supposed to post that they found them. Thousands of people painted rocks and tens of thousands of rocks were placed around the county for anyone to find. Like I said this was, and still is, a national movement. Many communities, groups and individuals are still doing this all around the country today.

I had fun with it and painted lots of rocks which I had a ton of fun hiding. Sometimes someone would post up a rock of mine they found and it made me happy. Here are some of the very first rocks I painted to hide. 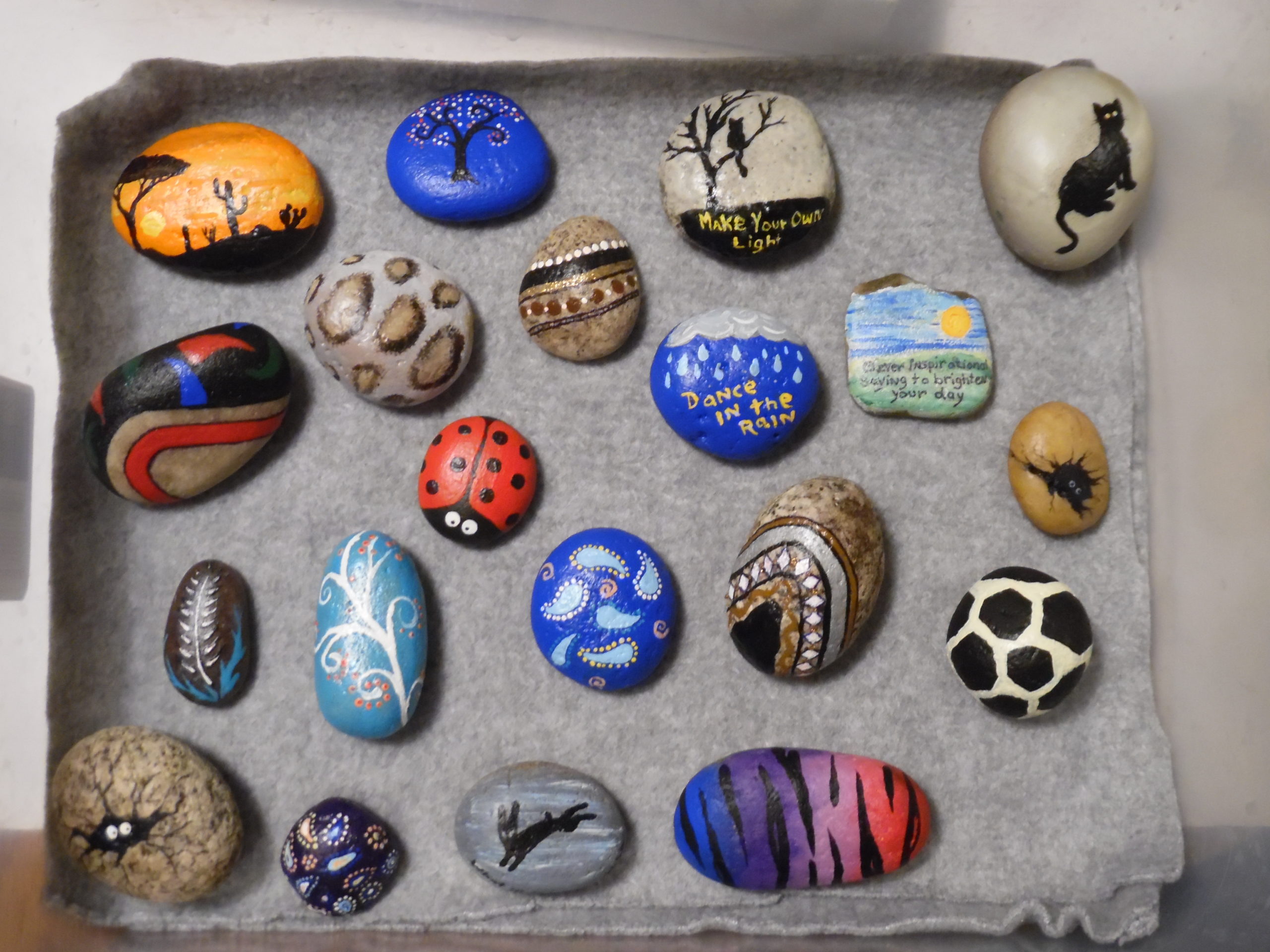 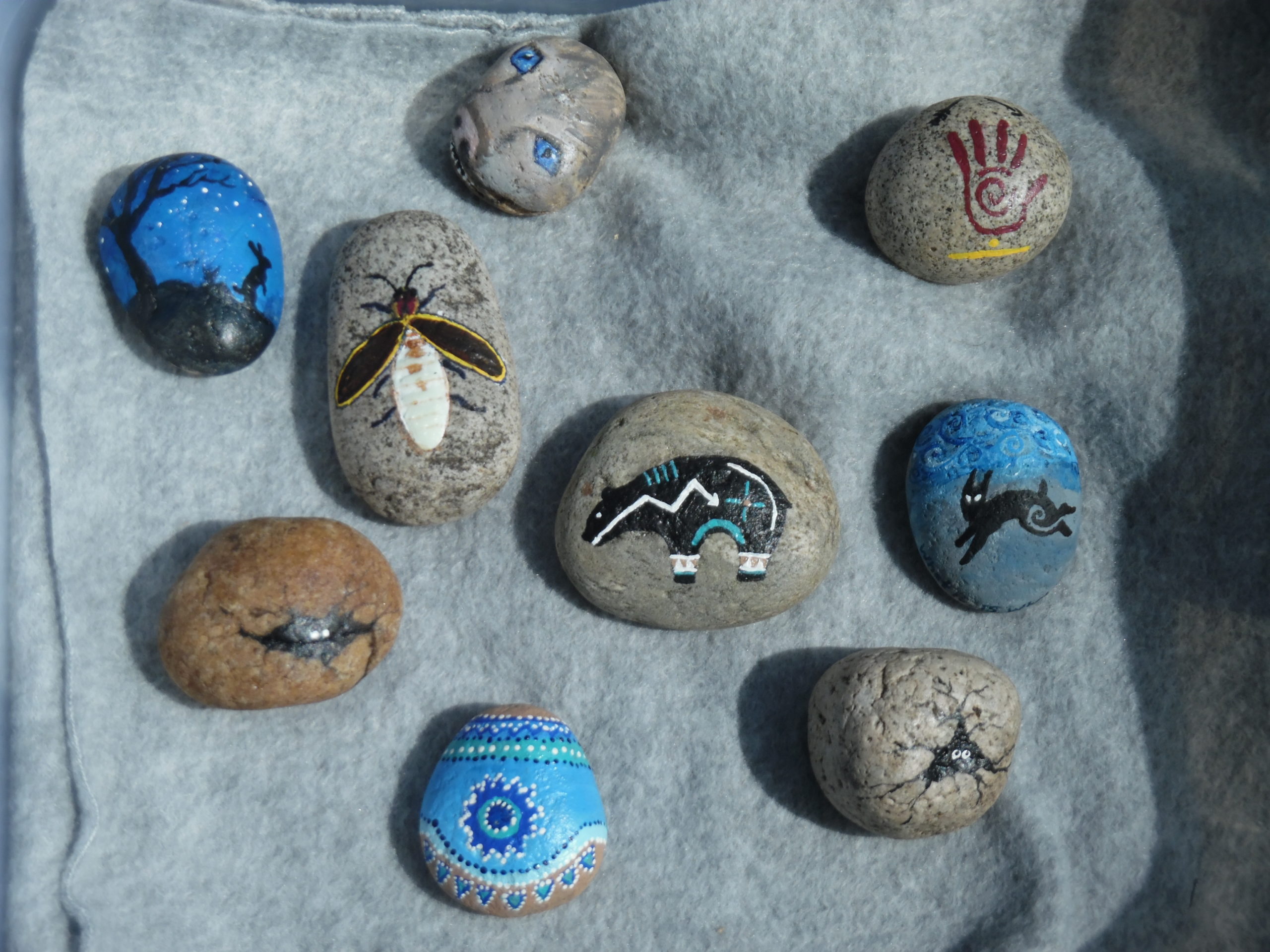 I played around with many different styles. But then my art began to change. The images grew less abstract and more based on nature and things that had a deeper personal meaning for me. 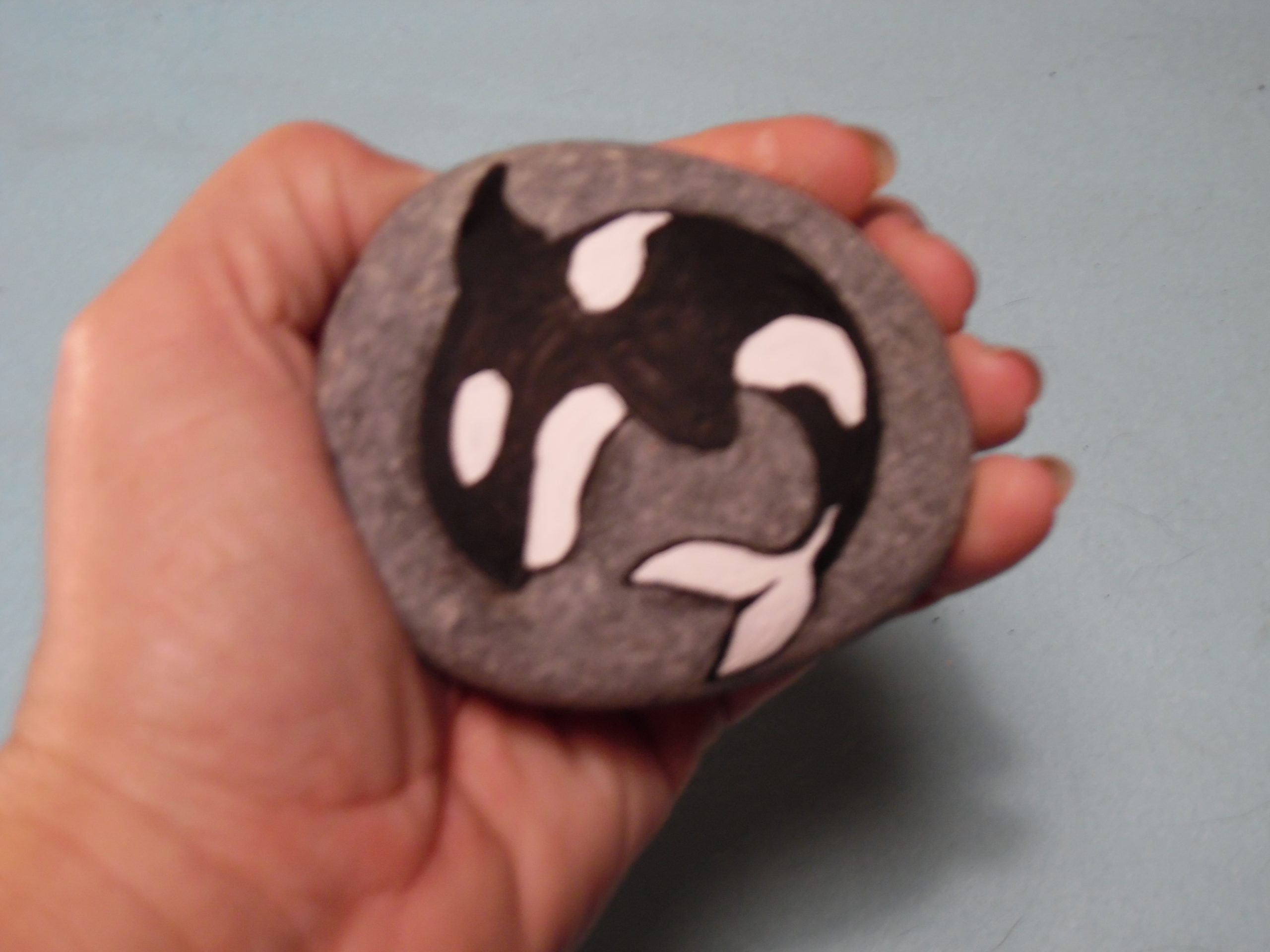 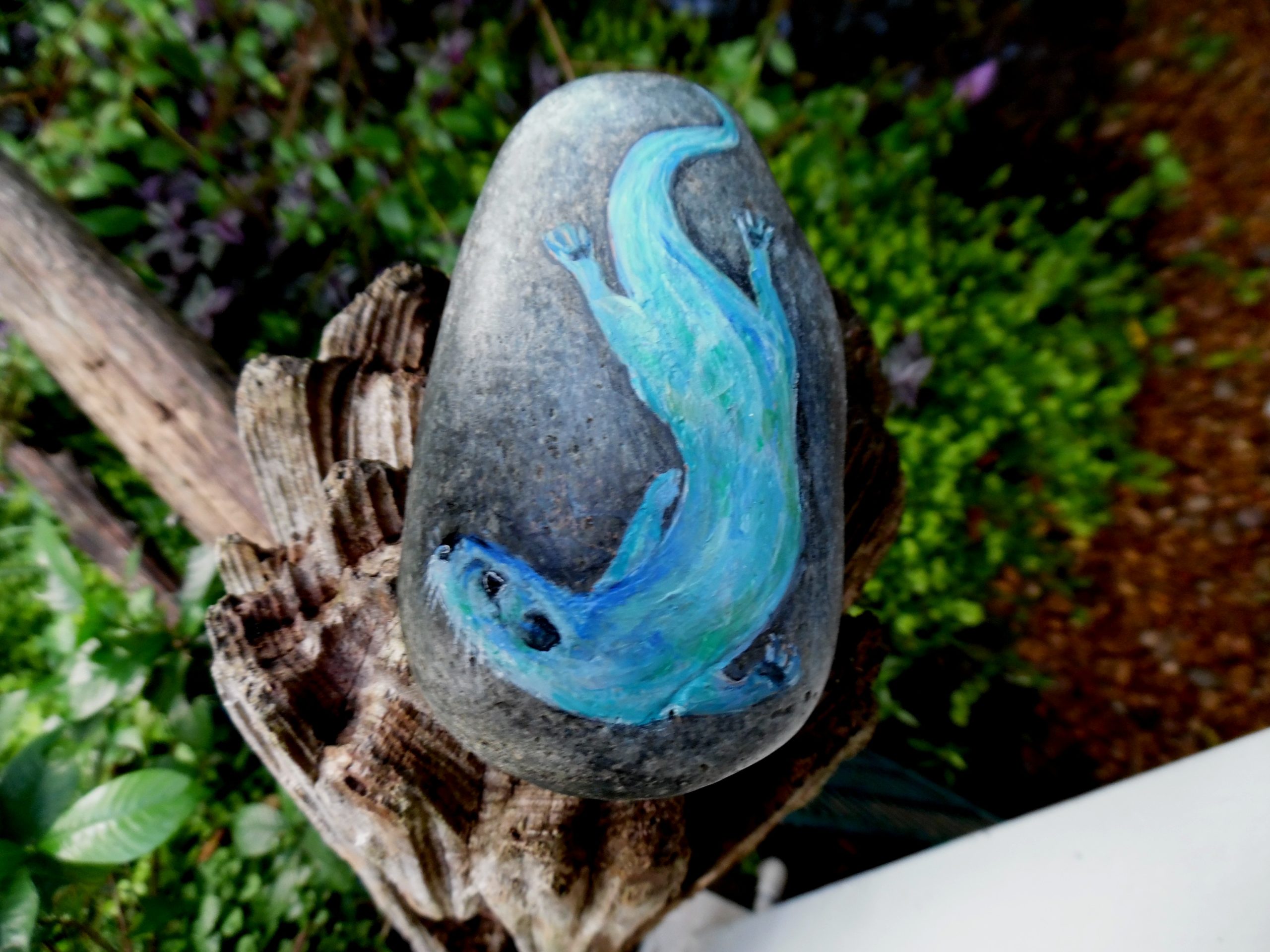 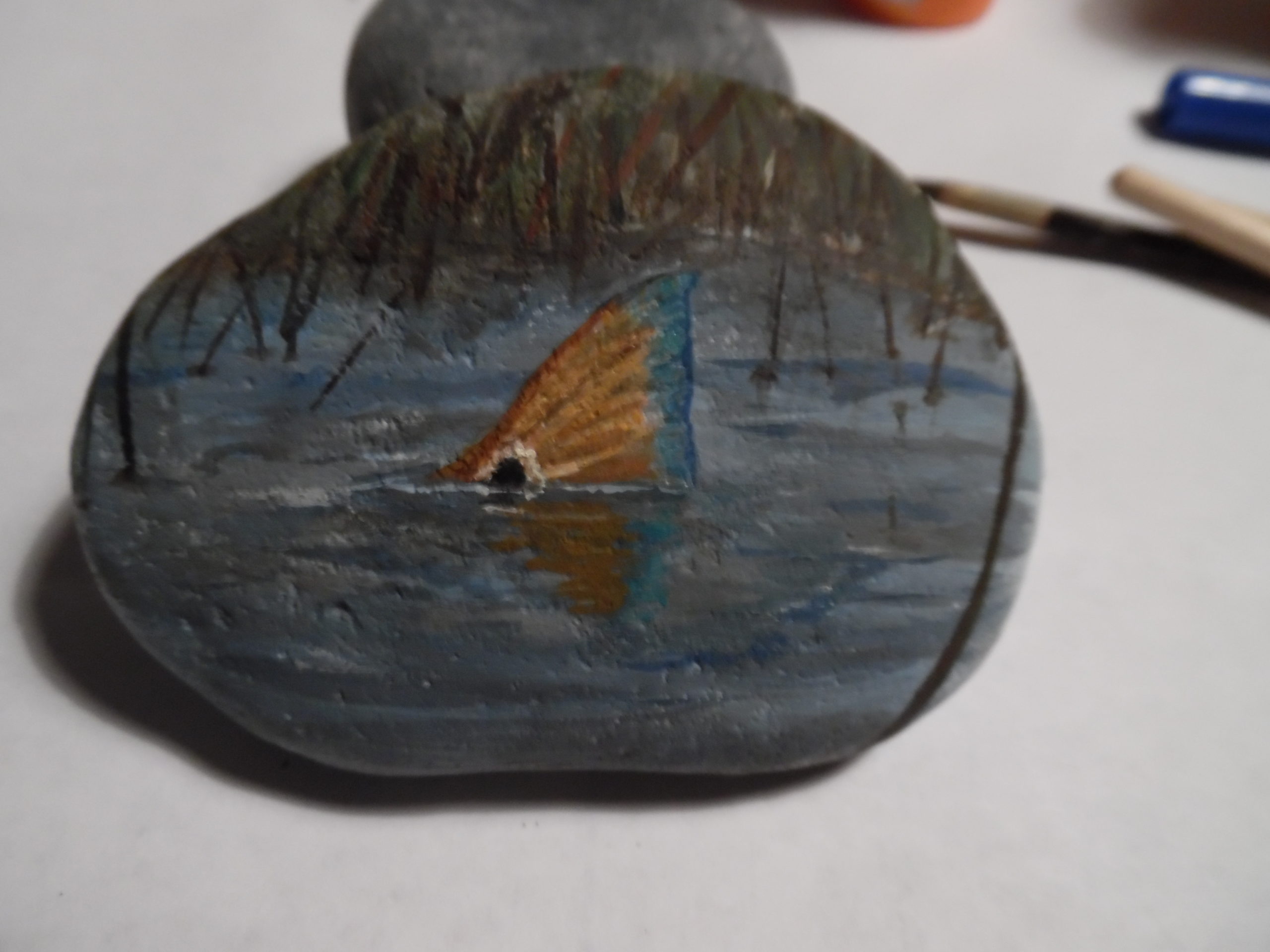 Then this rock happened. 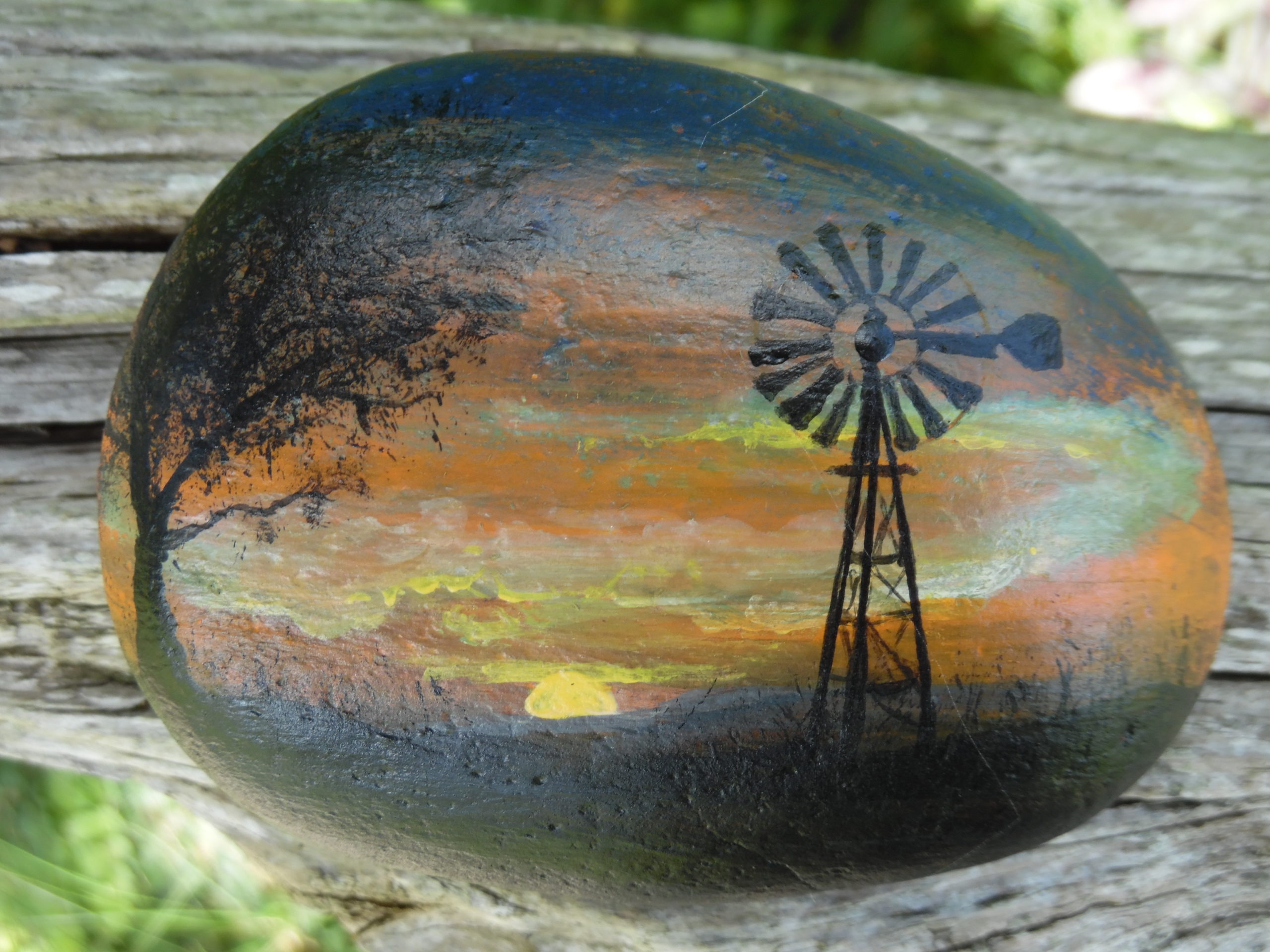 This rock became a turning point for me. I realized that I could paint. When I was approached by someone who wanted to buy it from me I was shocked. Other people actually WANT my art?

With that confidence under my belt I started painting rocks that made me feel good. With each one I learned a bit more. They became more and more realistic and detailed.

I had fun but eventually I slowed down and pretty much stopped. New interests had grabbed my attention, which lets face it, isn’t hard to do. Like running for City Council. As I became more and more involved in the City I stopped painting altogether. Then I dawned on me. Why not combine my interest and paint rocks for MY city?

And so I started painting again. No longer did I run all around the county hiding rocks in distant places. I kept my talent close to home. I donated rocks to local events and painted special rocks for special people. And I began hiding rocks within the City of Iowa Colony. I learned a lot about the city. I traveled roads I didn’t even know we had. It gave me a better appreciation of how wonderful and great our city is. 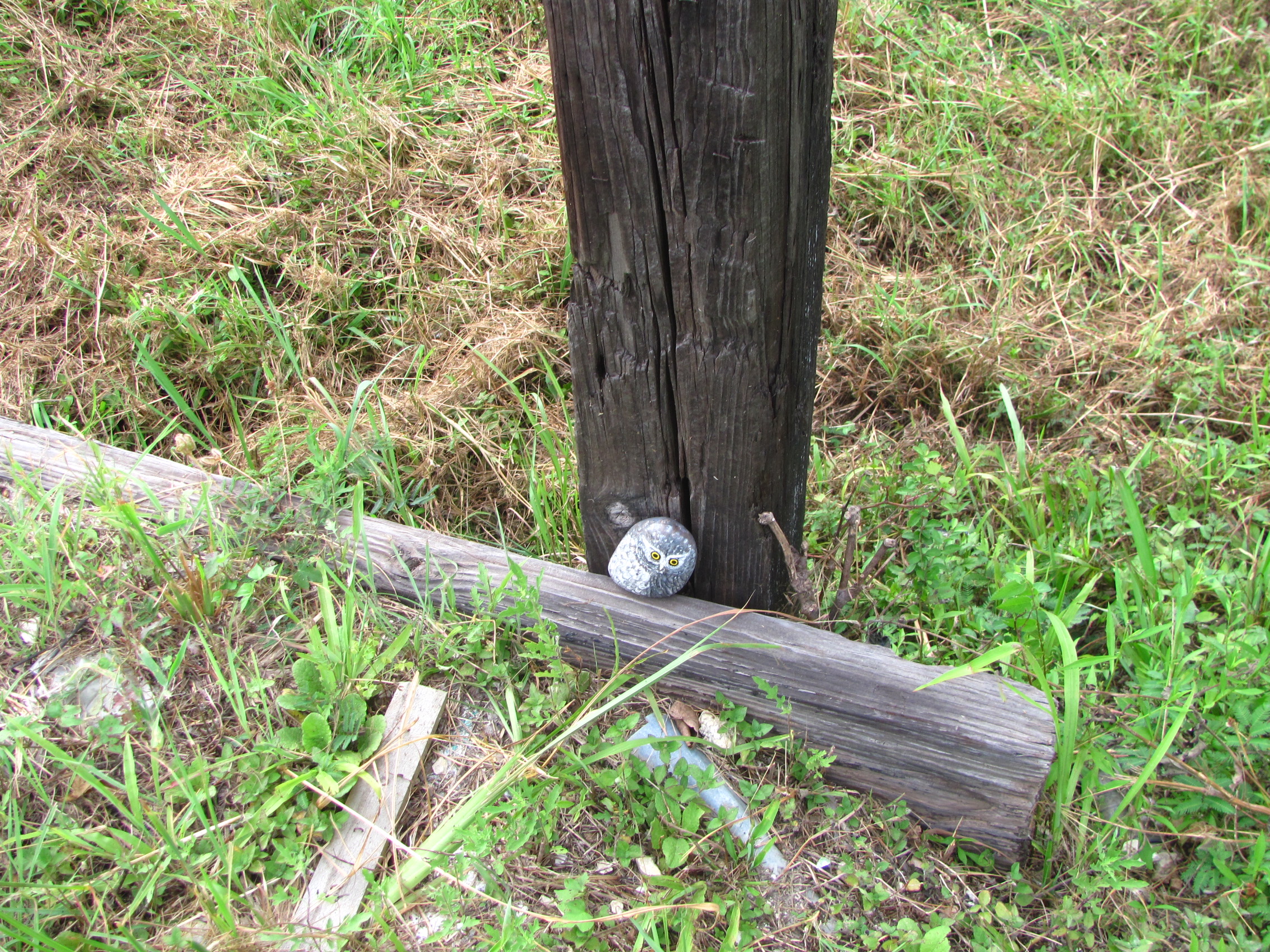 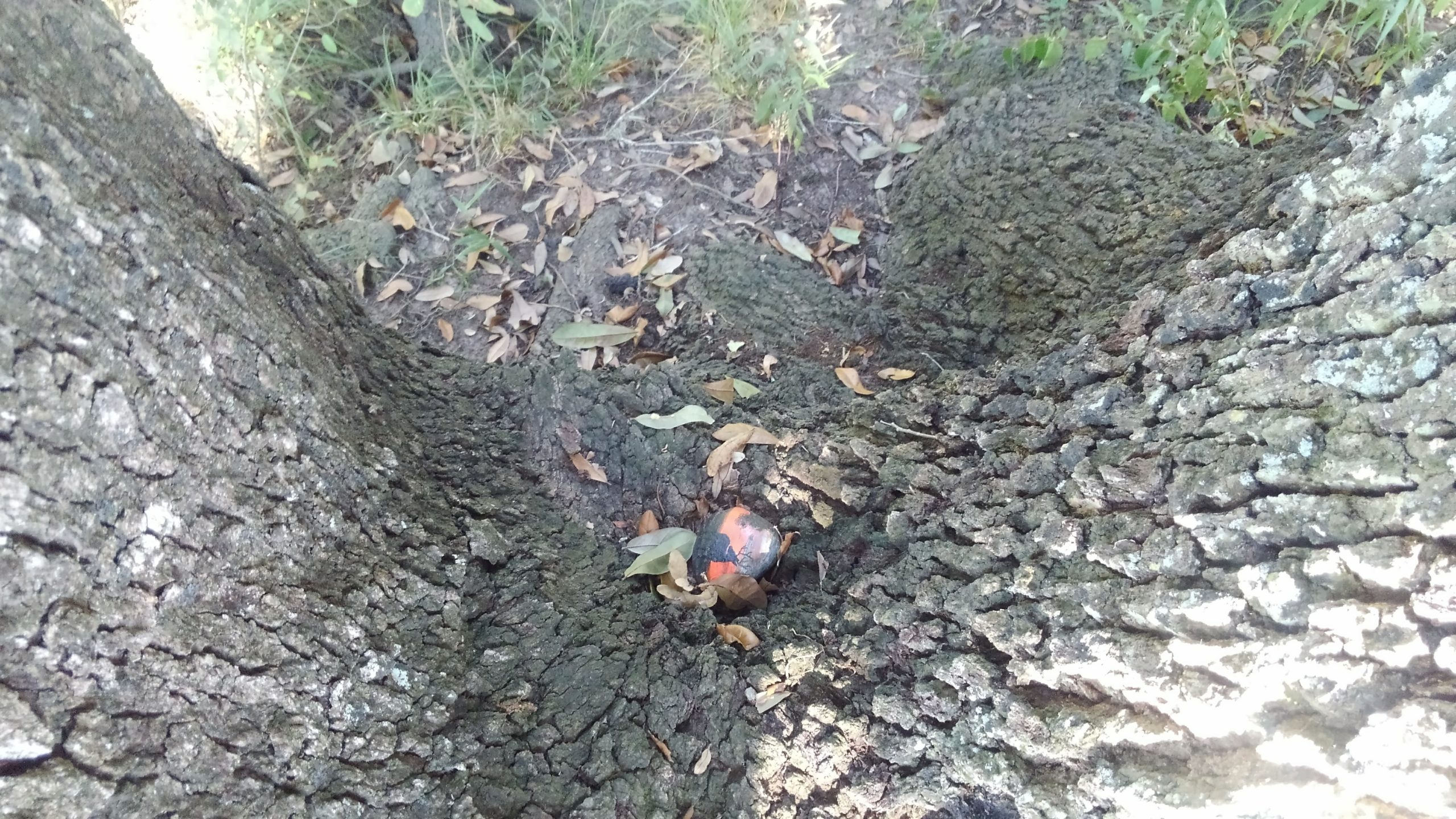 I would post up pictures of the rocks on the cities unofficial Facebook page. Sometimes just the rocks, sometimes it was a pic of where I hid the rock. It was/is amazing. People would take off work to find a rock, get up in the middle of the night to go looking with flashlights, gather together and blanket an area looking. It was/is awesome. But my rock posts were becoming annoying to some residents. They (the rock posts) began to take over the community page. So I made a page dedicated to just the City rocks. And so the Facebook page Iowa Colony Rocks (now removed) was born. Now I had a place to post all the pictures I wanted. Other residents began to paint and hide rocks too.

I kept painting and enjoyed every minute of it. So far I think I have hidden over 300 rocks around the city. Here are some of them.
The red X’s are the ones I know were found. 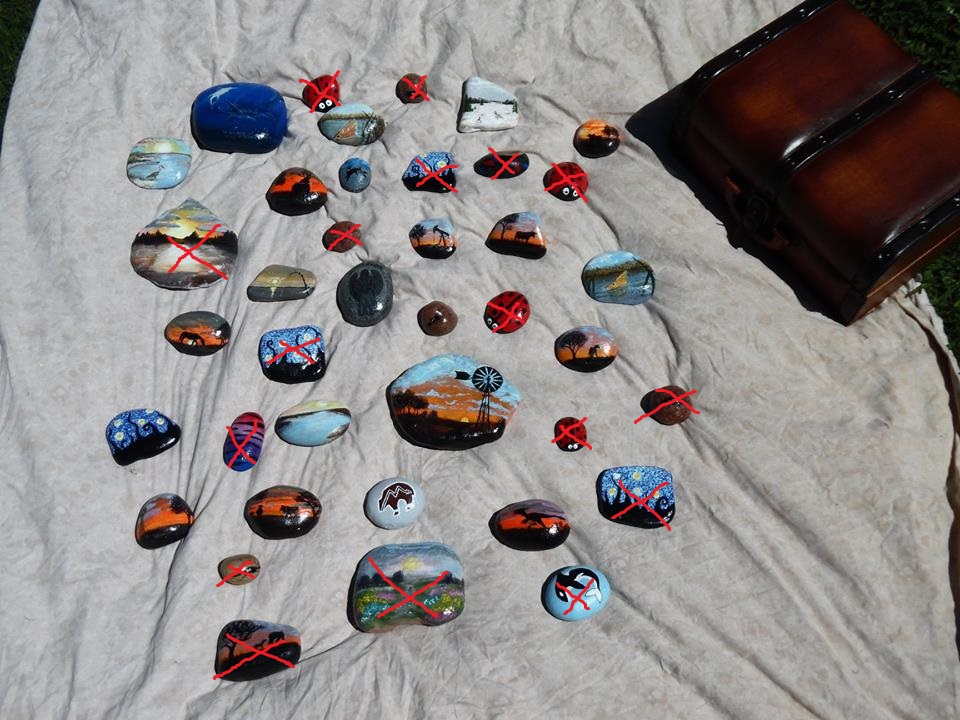 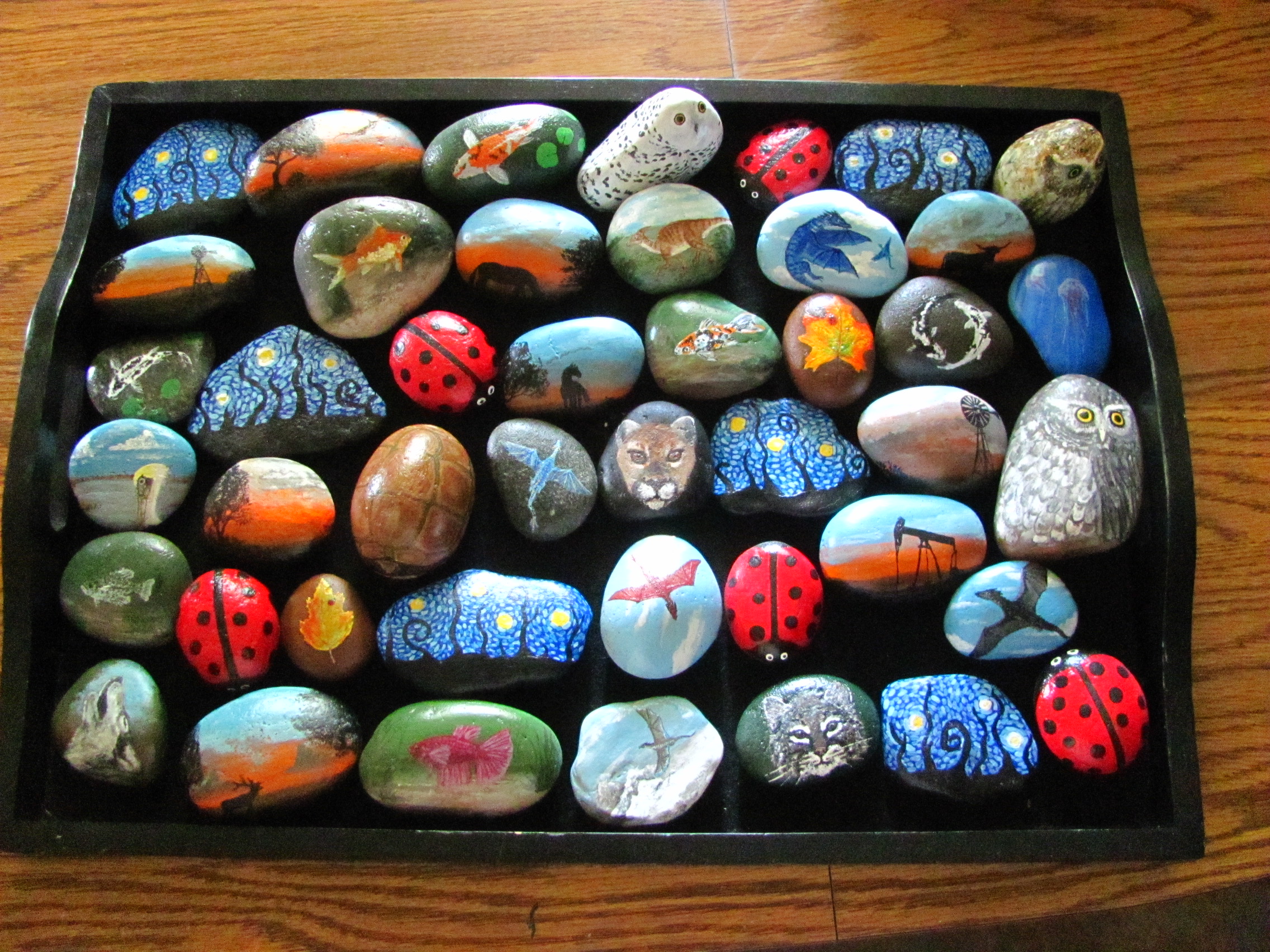 But my art began to change again. I started painting even more realistic rocks. Nature still played an important part.

Sept, 23 2020
A few rocks I painted for friends and one special boy who was in the hospital and missed his fur friend terribly. The Pyrenees is for a friend who just lost her and was hurting badly.

You may notice that I do a large amount of sunset rocks. The reason for this is simple. When Steves’ mother passed I inherited most of her painting supplies. For some reason she had tons of orange paint. What was I going to do with it all? I know. Sunsets!

Some rocks I just panted as gifts. These were fun.

May 2021. Here is another set of rocks I gave away as gifts.